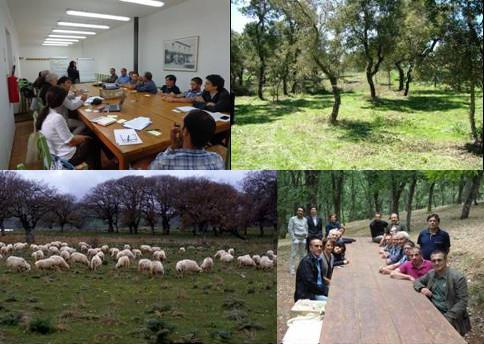 Semi-extensive livestock farming occupies about 50% of the total area of Sardinia (24090 km2), and about half of this grazed area belongs to the category “other wooded areas”. In addition, forests occupy about 5800 km2 in Sardinia, and about 30% (1800 km2) are considered to be of high nature value. Hence much of the Sardinian rural landscape is characterized by a mosaic of agroforestry systems including grazed forests and wooded grasslands where scattered Quercus species (holm oak, cork oak and deciduous oak trees) are mixed with permanent or temporary pastures or intercropped with cereals and/or fodder crops.

The first meeting of the stakeholder group was help on 9 July 2014 at Foresta Demaniale di Monte Pisanu (Bono) in Sardinia. The meeting was attended by 15 stakeholders from various backgrounds including farmers, researchers, and policy makers. The highly ranked positive attributes of the agroforestry system were the diverse and high quality of the products, the high value of the cultural landscape, and the reduction of fire risk. One of the research issues that emerged was the need to improve the quality and quantity of the pasture component of the silvopastoral systems.
If you would like to know about the activity of this group, please contact Dr. Antonello Franca <a href="mailto:a.franca@cspm.ss.cnr.it">(a.franca@cspm.ss.cnr.it)</a> at the Institute of Animal Production System in Mediterranean Environment (CNR-ISPAAM).

An initial stakeholder report was produced in September 2014.

A research and development protocol was produced in March 2015.

A system description describing some initial results, including pasture diversity, was produced in December 2015.

Antonello Franca and his colleagues describe the lessons learnt from their research on legumes in the wood pastures of Sardinia.