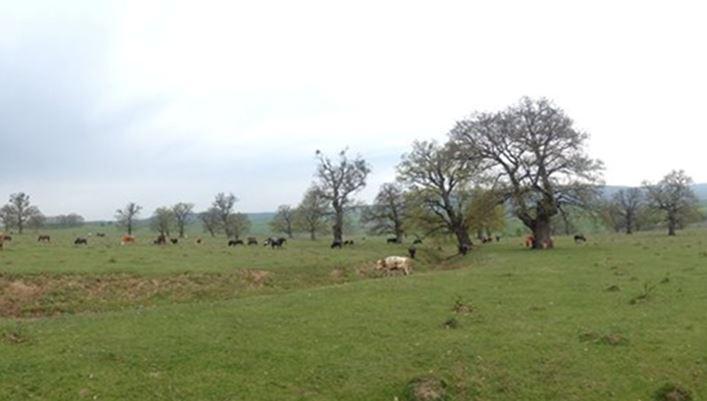 Many of the wood pastures in Southern Transylvania in Romania were created by the grazing of closed oaks woodlands and they are considered to have high cultural and natural value due to the presence of the ancient oak trees. The ecological and economical sustainability of the system is thought to be favoured by cattle and buffalo grazing rather than sheep grazing and the maintenance of the old, large, often hollowing or dead trees. As wood-pastures from this region were always communally managed, their social sustainability will depend on finding solutions to promote their value for rural communities. However a key problem to long-term sustainability is the lack of tree regeneration, the intensive sheep grazing, the loss of large, old trees and the overall decrease of the social value of the wood-pastures.

Tibi Hartel has been working with Babes-Bolyai University and a Romanian-based charity called ADEPT to promote the social and ecological sustainability of wood pastures in the Southern Transylvania in Romania. He argues that because of the high social, cultural and economic significance of the wood pasture, any future management plan needs to understand the historic management and social role of these landscapes, and to recognize the multiple roles of these sites from a whole system perspective. Crucial elements of a conservation policy for wood-pastures include securing the value of the grazing systems and the tree components (old and young), as well as promoting the role of local communities.

Three potential research themes have been identified. The first is to determine economic and socially viable techniques to increase the regeneration of new trees on the wood pasture. This could be done by temporal reduction of the grazing activity in various parts of the wood pastures, or tree protection with thorny shrubs. A second potential area is a comparison of the biodiversity impacts of grazing with cattle with grazing by sheep. A third area is to investigate the openness of local communities to engage with the protection of ancient trees on wood pastures.

If you would like to know about the activity of this group, please contact Dr Tibi Hartel hartel.tibor@gmail.com

A research and development protocol was produced in July 2015

A synthesis of recent and on-going research related to wood-pastures in southern Transylvania was produced in September 2015.

Tibor Hartel and his colleagues describe the lessons learnt from their research on the wood pastures of Transylvania in Romania.