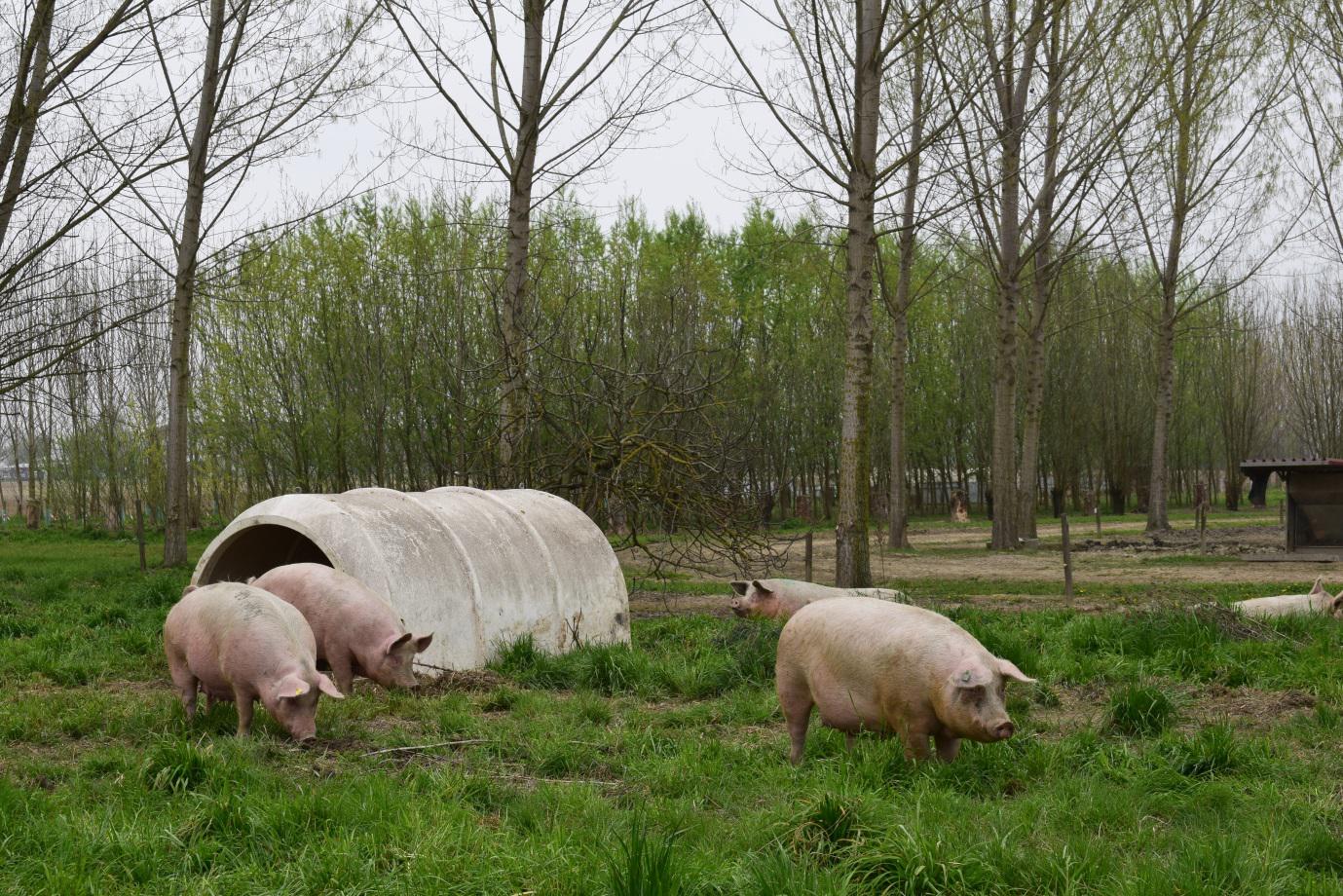 Free-ranged organic pig production in an area bordered by poplar trees is being evaluated at Sasse-Rami Experimental Farm near Ceregnano, Rovigo, in the Veneto region of Italy (Photo: Paul Burgess).

Valerio Bondesan and Cristina dalla Valle of Veneto Agricoltura in Northern Italy hosted a visit by Paul Burgess on 20 March 2017. The day started with a visit to the Sasse-Rami Experimental Farm near Ceregnano, Rovigo. On one part of the farm, Veneto Agricoltura is evaluating the success of free-range organic pig production amongst different trees densities and distributions (e.g. fields bordered by poplar or high density poplar, willow and black locust trees within paddocks). The trees were not in leaf during the time of the visit, but the over-wintered sows appeared to be content in the field. The trees contribute to pig welfare by providing shade during hot summer weather and the trees could reduce the risk of nitrate leaching from the pig manure. During the past year, a relatively small number (n = 250) of the 10 year-old poplar have been thinned and this has provided some minor additional revenue for the farm. Contractors agreed to remove the trees if they had access to the best cuts of wood (about two-thirds of the weight) and chopped the remaining part for on-farm heating use.

In addition, Veneto Agricultura is also examining tree-crop interactions within a 10 ha organic arable field. Cristina dalla Valle explained that the 10 hectares were planted with three different densities of trees. There are four rows of Italian genotypes of white and black poplar clones planted at the equivalent of 100 trees per hectare. Another area is planted at a density of 53 trees per hectare and another at 90 trees per hectare. In these areas, the two main species are black walnut (Juglans nigra) and common oak (Quercus robur). They are planted in the arrangement of three walnut trees and three oak trees with intermittent experimental trees including small leaf-lime (Tilia cordata), narrow leaf ash (Fraxinus angustifolia), Norway maple (Acer platanoides) and pecan (Carya illionensis). 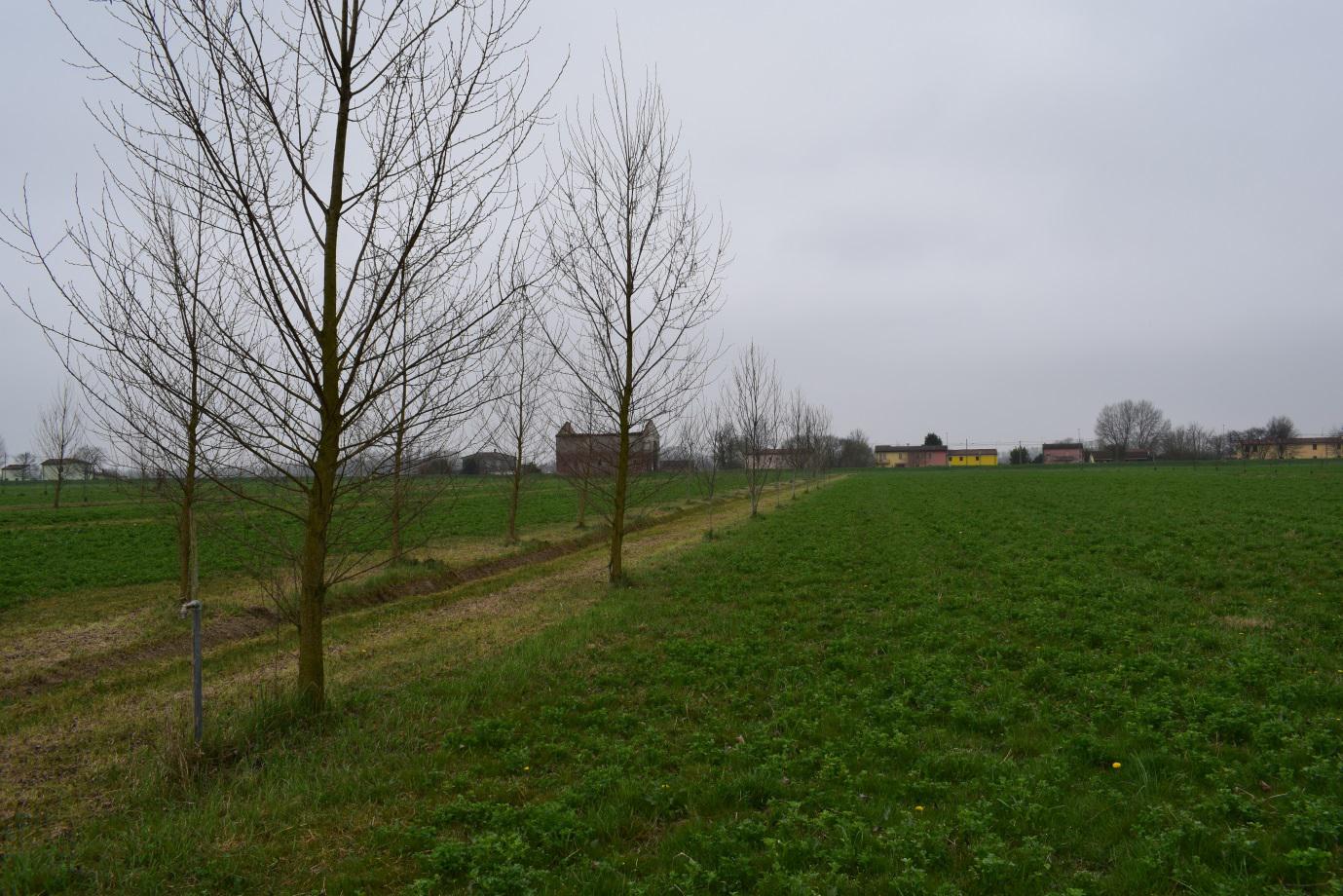 Veneto Agricultura is also examining the use of tree rows within an organic system at Sasse-Rami. In this example, poplar and oaks are being grown with alfalfa (Photo: Paul Burgess). The silvoarable experiment at Sasse-Rami includes a range of tree species and tree densities. 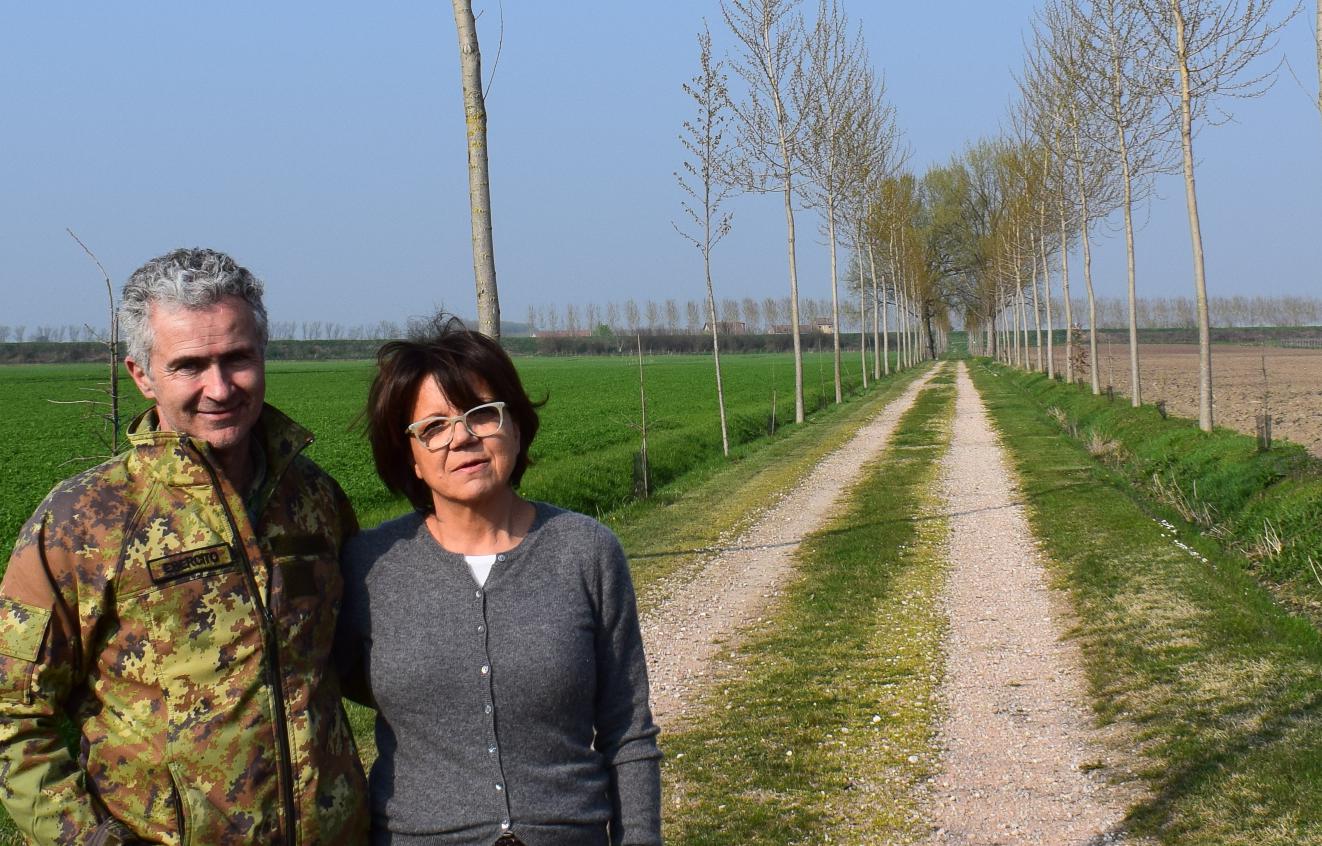 The afternoon included a visit to meet Mauro Sangiovanni and Lorenza Padovan who took over the ownership of the 50 ha Casaria Farm near Masi, Padova within the past five years. Mauro is a trained landscape gardener and he has brought these skills to the management of the farm. As in many parts of the Padana Plain of the Vento region, the land is low-lying and flat and numerous drainage ditches run parallel across each field at a spacing of about 30-35 m. With the objective of increasing the economic value of the farm and its output, they have alternately planted poplars and oak trees at 5 m intervals along the drainage ditches. The arable crops, largely managed using a contractor, include alfalfa, wheat, maize, and soya. The standing value of each poplar tree after about 12 years is anticipated to be about 15-20€. Feedback from local farmers, in the area has generally been positive. The walk around the farm was pleasant and the mature trees on the farm had attracted a flock of herons. One longer-term goal is to look at the options for agrotourism on the farm. 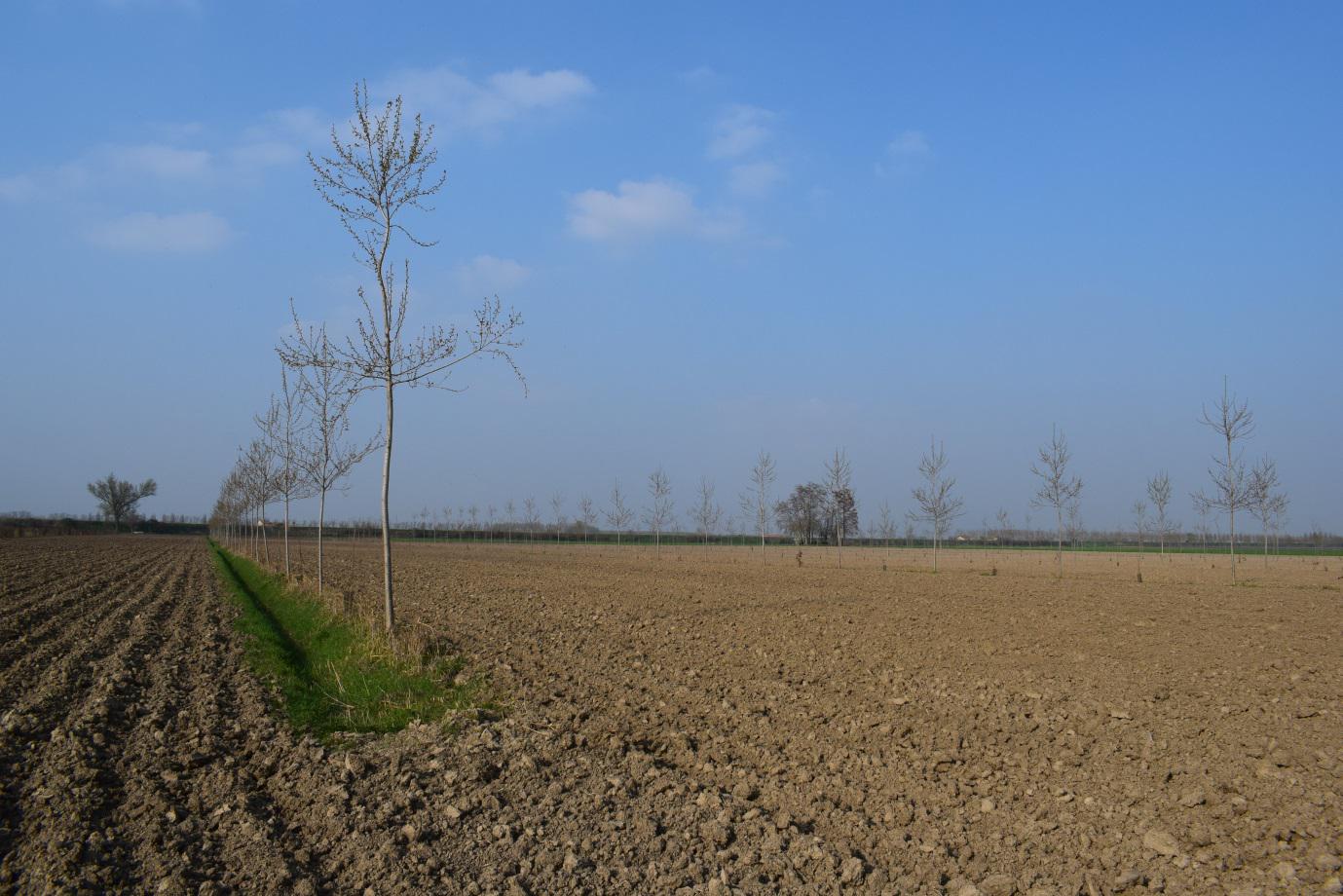 As is many parts of the Veneto region of Italy, there are within-field drainage ditches spaced at 30-35 m. Poplar and oak trees have been planted along the lines at a 5 m spacing, with the intention of maintaining arable cropping, harvesting the poplar at about 12 years, and the oaks at a further date (Photo: Paul Burgess).

Further details of the experimental site and the field trial can be found at: