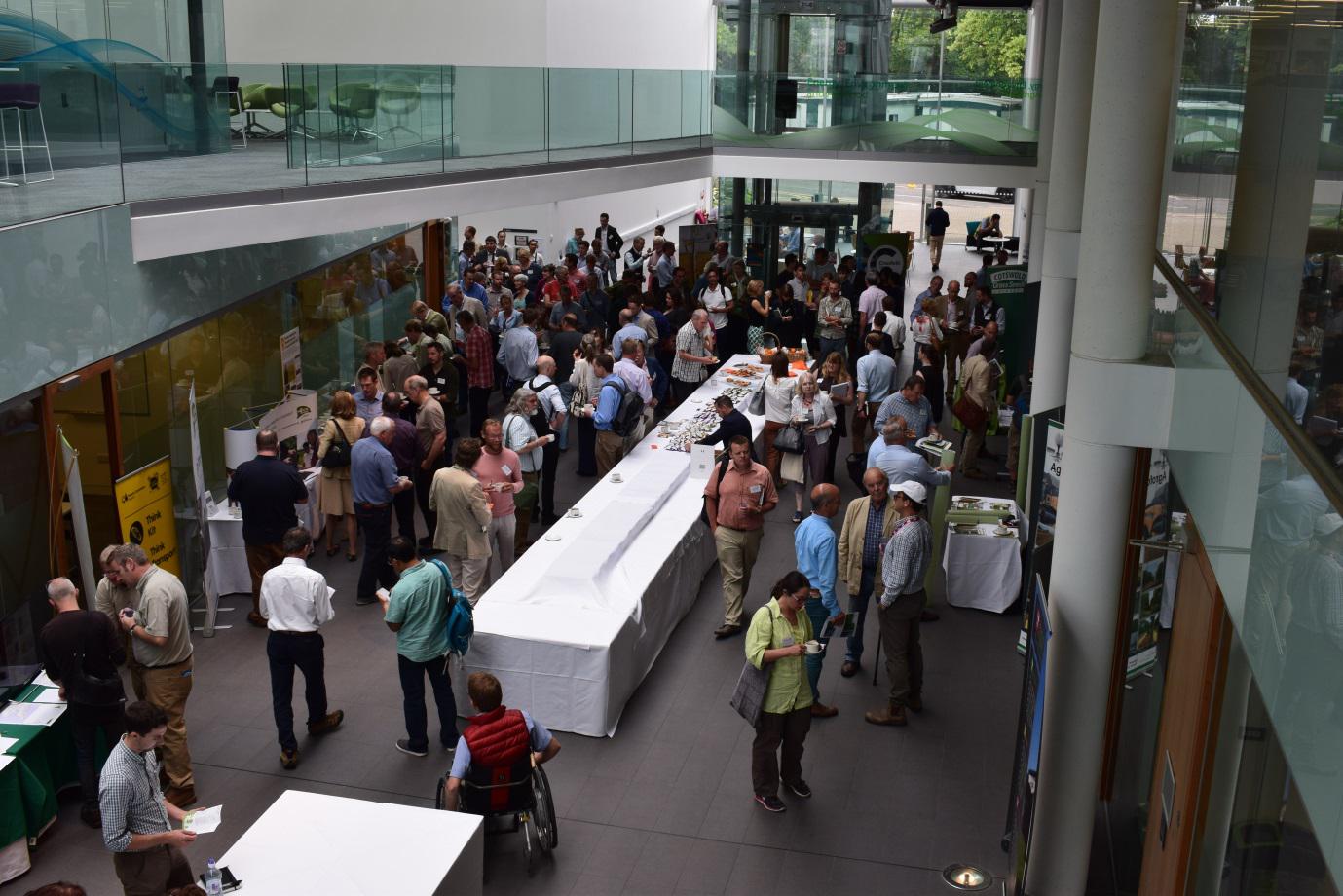 Over 250 delegates attended the successful “Agroforestry 2017” conference organised by the Woodland Trust, the Soil Association and the Royal Forestry Society, with support from the AGFORWARD project, at Cranfield University in the UK on 22 June 2017. In a show of hands there were about 100 farmers and/or foresters who indicated that they practised some form of agroforestry. This was the largest agroforestry conference held in the UK and there was a real “buzz” to the day.

The meeting was chaired by Charlotte Smith who is a presenter on the UK “Farming Today” radio programme. During the day, presentations were made by AGFORWARD researchers Patrick Worms, Tim Pagella, Fabien Balaguer and Paul Burgess, and AGFORWARD also held a joint surgery session with the AFINET project. The presentations are available at the end of this web-page.

In the initial session Patrick Worms, from the World Agroforestry Centre, explained that agroforestry is a universal practice where farmers maintain or enhance farm production by integrating trees. For example where trees like walnut are commercially planted at wide spacings, integrating trees with crops can increase land productivity by up to 40%. Agroforestry trees are typically less prone to wind throw than woodland trees and there can also be benefits through reduced nitrate leaching and increased earthworm numbers.

Tim Pagella, also from the World Agroforestry Centre, explained that globally 43% of agricultural land had at least 10% tree cover. He cited research demonstrating how agroforestry can improve the on-farm storage of water, carbon, and nutrients; reduce soil erosion and provide shelter to livestock. He recommended that farmers planning to establish or extend agroforestry on their farm should pay due attention to the lessons learnt from scientific research and existing on-farm demonstrations.

Mike Strachan from the Forestry Commission in Scotland explained how agroforestry can help overcome some of the cultural barriers that exist between farming and forestry. There were at least 30,000 ha of woodland grazing in Scotland and he described some of the grants being used to support low density tree planting on farms.

Fabien Balaguer explained how the French Agroforestry Association is leading a long-term project in South-West France (in partnership with a range of other organisations). The project is using agroforestry as a means of achieving productive, diversified and sustainable businesses and landscapes.

After coffee, there were a series of short videos, produced by the Woodland Trust, demonstrating how farmers were practically applying agroforestry. These included the establishment of apple trees on an organic arable farm near Peterborough by Stephen Briggs. David Brass explained how trees improved the welfare of his hens at the Lakes Free Range Egg Company in Cumbria. Paul and Nicola Renison explained how they were planting windbreaks on their exposed upland farm in the Pennines to provide shelter for sheep and cattle. Andrew Barbour demonstrated how he integrated trees on his upland farm near Pitlochry in Perthshire, Scotland. Chris Stoate explained how trees were being incorporated with the farming and game conservation activities at the Allerton project in Leicestershire. Lastly James Thomas of Haywood Oak Farms in Nottinghamshire explained how they were planting trees on their farm which specialises in vegetables.

After lunch, the focus moved to “finding or making a market”. Sophie Churchill, the President of the Royal Forestry Society, outlined some principles for finding a market for agroforestry products including taking advice and talking to others. Paul Burgess from Cranfield University explained the substantial non-market benefits of agroforestry. The UK Government is starting to use accountancy methods to describe national changes in the stock of “natural capital” and the annual flows of “environmental services”. This approach can also be used at a farm or landscape level to describe how trees can increase stocks such as carbon, and positive annual flows such as carbon sequestration, removal of ammonia, and providing a positive experience for visitors. He explained that the societal benefits of trees are being estimated by quantifying the physical extent of such services and assuming a monetary value per unit service. He concluded that such studies were providing strong evidence that it made sense for governments to support agroforestry. In some cases, individual non-agricultural businesses may also benefit from supporting sound tree management on farms. For example Christophe Klotz explained how Agrivair supports local tree planting and management within the water catchment of the Vittel water bottling company at Vosges in Eastern France. Lastly Alexander Hunt described how the Potash Farm and Walnut Tree Company produces and sells a range of products made from walnuts and cobnuts.

This was followed by an open forum where four panel members reflected on the key points of the day. The panel members were Beccy Speight from the Woodland Trust, Shireen Chambers from the Institute of Chartered Foresters (ICF), Chris Price from the Country Land and Business Association (CLA), and Rowan Reid from the Australian Agroforestry Federation. The speakers praised the high level of dynamism, entrepreneurism, innovation, and enthusiasm for sustainable farming demonstrated at the conference.

Lastly after the main auditorium session, delegates could visit “surgery” sessions. Partners from AGFORWARD, working with partners from the AFINET project, demonstrated a range of agroforestry products being produced marketed in different parts of Europe such as olives, acorn biscuits, and apple juice. Hence the agroforestry conference both helped to fill the mind and the stomach. 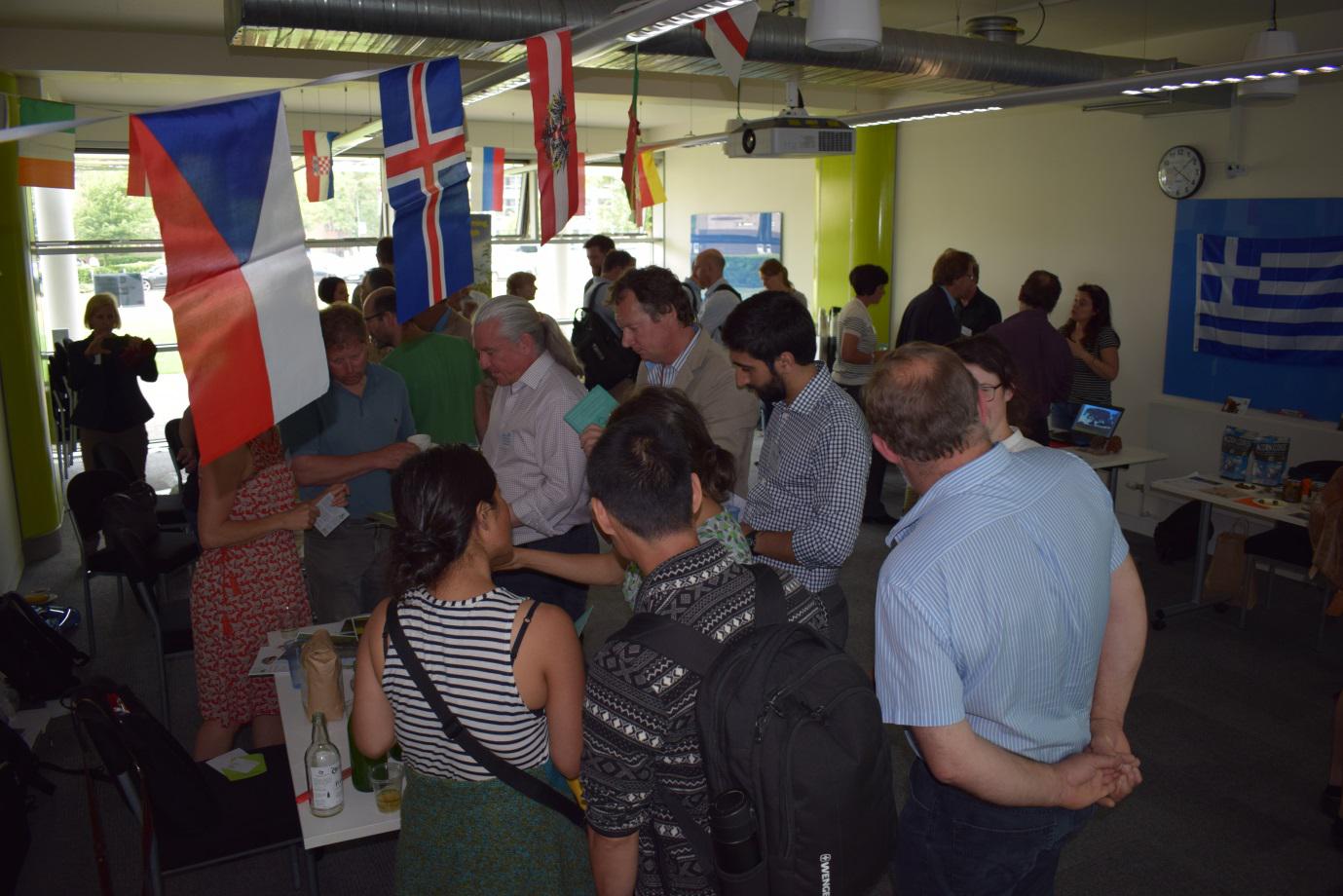 AGFORWARD and AFINET held a surgery demonstrating a range of agroforestry products from across Europe.

Pagella, T. (2017). What can agroforestry achieve: the evidence base. Presentation at Agroforestry 2017 held at Cranfield University, Bedfordshire, UK on 22 June 2017.

Strachan, M. (2017) Agroforestry and an integrated approach to farming in Scotland. Presentation at Agroforestry 2017 held at Cranfield University, Bedfordshire, UK on 22 June 2017.