Practical Agroforestry in the UK and Ireland 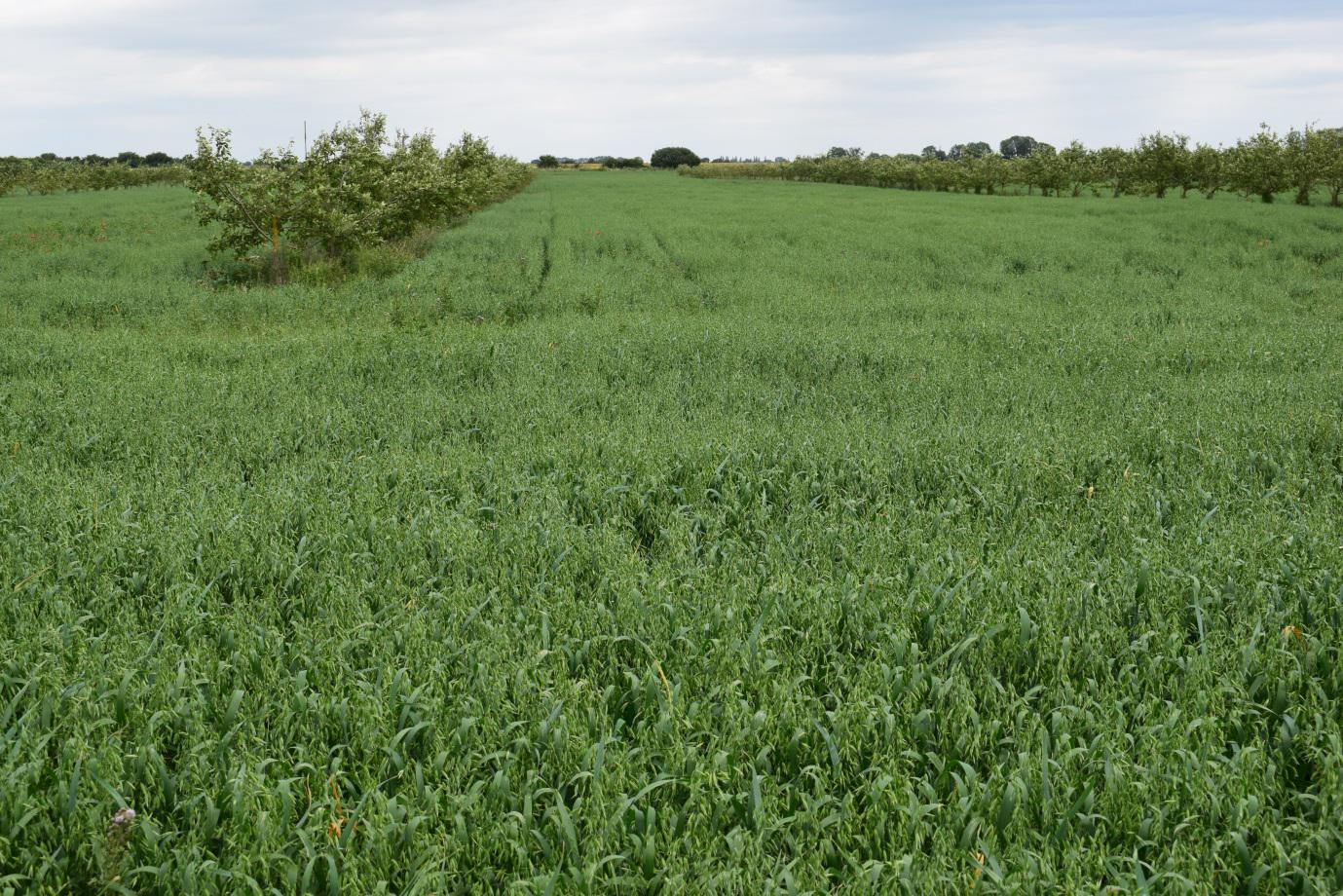 Immediately after the Agroforestry 2017 Conference, Cranfield University also hosted the UK Farm Woodland Forum meeting which focused on “Practical Agroforestry in the UK and Ireland”. There were presentation sessions on the morning of Friday 23 June focused on policy and technical aspects of agroforestry. In the afternoon, there was a field trip to the apple and arable agroforestry system managed by Stephen and Lynn Briggs. In total about 40 people attended the meeting.

Paul Burgess of Cranfield University, working with Rosa Mosquera Losada (President of the European Agroforestry Federation), gave a presentation entitled “Update on Agroforestry Policy within the AGFORWARD project”. The presentation highlighted how agroforestry can help European countries achieve the Sustainable Development Goals and the objectives of the Common Agricultural Policy. Building on a review of current agroforestry support across the European Union (Mosquera Losada et al. 2016), the presentation highlighted some the draft recommendations being considered by the project in relation to Pillar I and Pillar II of the CAP.

Gerry Lawson (Vice-President of the European Agroforestry Federation) then gave a more focused presentation on the current implementation of measures related to agroforestry in the UK and Ireland, covering the initiatives in Ireland and Northern Ireland (Eugene Curran), Scotland (Mike Strachan), Wales (Tim Pagella) and England (Jo Smith).

After coffee, Vicky West of the Forestry Commission gave a talk on “Agroforestry and the Carbon Code”. In the UK, the Woodland Carbon Code scheme provides the infrastructure to enable landowners to quantify and sell carbon credits for the carbon dioxide that their trees sequester. It can link landowners with companies who are looking to buy such credits to compensate for greenhouse gas emissions. The presentation introduced the scheme and discussed the potential opportunities for landowners practising agroforestry.

Tim Pagella of Bangor University described some of the outputs of the MULTI-LAND project. This UK project aims to identify positive interactions between trees, livestock and soil and improve our understanding of animal behaviour and metabolism to increase productivity and reduce greenhouse gas emissions.

Martin Wolfe of Wakelyns Agroforestry described how agroforestry can contribute to the decentralisation of food and energy production, illustrating his talk with practical examples from his farm in Suffolk. Based on 25 years of experience, Martin demonstrated how agroforestry can increase the range and sustainability of food production whilst the trees can be managed for bioenergy.

The last presentation was made by Rowan Reid who runs the non-profit Australian Agroforestry Federation. Rowan explained how, after leaving academia, he brings farmers together and, through a mentoring process, helps commercial farmers to help themselves to profit from the integration of trees on farms.

In the afternoon, the participants visited Whitehall Farm near Peterborough where Stephen and Lynn Briggs manage 106 ha held on a 15-year tenancy from the local council. When they took over the farm, about nine years ago, they converted the arable enterprise to an organic system. The farm is flat, close to sea-level, and excess water is removed by the local drainage authority. The soil varies across the farm ranging from soils with a high organic content (>23%) in places to brick clay elsewhere.

On taking over management of the farm, Stephen soon became aware that he was losing soil from wind erosion. This was a key reason why he planted an apple tree agroforestry system on half of the farm (52 ha); the rest of the farm is still farmed organically without trees. In October 2009, trees of 13 late-maturing varieties of apple were planted 3 m apart in rows orientated north east/south west with a single variety in each row. The rows are 3 m wide and 27 m apart, giving 24 m wide alleys where Stephen grows organic arable crops. Within the tree rows, the density of trees is 1111 trees/ha which is a higher than in conventional orchards. However the actual density of trees across the whole system, and including the areas near the drainage ditches where trees cannot be planted, is nearer to 85 trees/ha.

Stephen received grant support for fruit tree planting and is receiving agri-environment payments through the Higher Level Environmental Stewardship. This includes support for creating wild bird, pollen and nectar mixtures of plant species in the tree rows. In the initial years, the tree samplings were being damaged when pigeons sat on them. Stephen has successfully addressed this problem by placing 3 m bamboo canes next to each tree to encourage the pigeons to sit there instead. The trees are pruned annually in winter to a goblet shape and are kept below the height of the canes.

During the visit, the primary arable crop being grown was organic certified gluten-free oats which will be sold locally to an organic flour-mill. Stephen anticipated yields of 6-7 tonnes per hectare. The apples are picked after the harvest of the arable crops in individual crates for each row (i.e. for each variety). They are sold to an East Anglian cider producer or are made into the farm’s own label apple juice, either as single variety juice or as blends. In the future, the plan is to sell more of the crop on-site and Stephen and Lynn are currently building a farm shop to sell their produce. 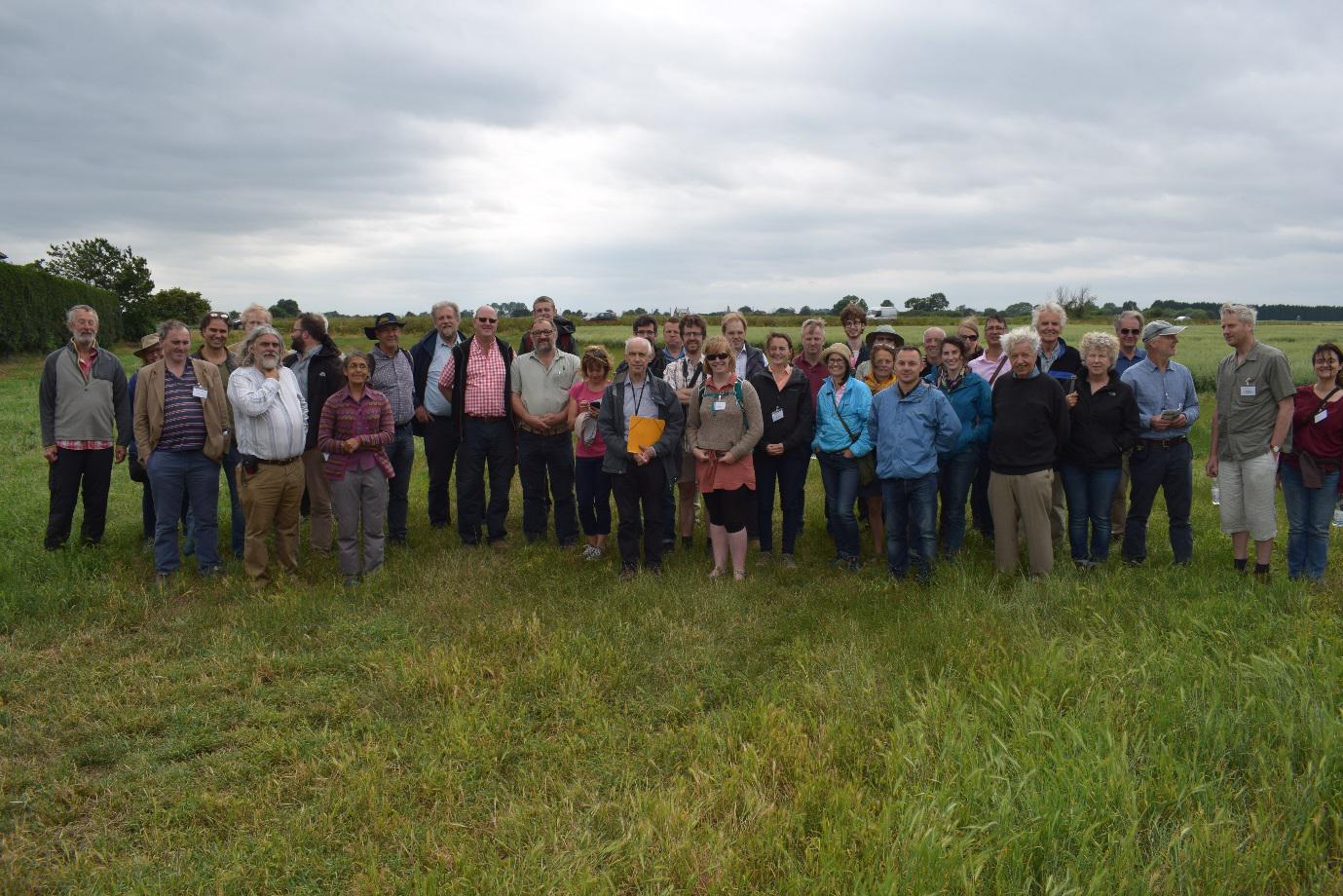 Wolfe, M. (2017). Agroforestry and the decentralisation of food and energy production. Presentation at the Farm Woodland Forum Meeting at Cranfield University on 23 June 2017.